We landed at Port Moresby at 5:00 a.m. and sailed through immigration and went through customs. Even though the x-ray machine was picking up the unusual items in our suitcases, we produced our official looking documents on LML letterhead with embossed seals and the guy waved us on. He didn’t open one suitcase. Another small miracle.

From there we walked the three minutes to the domestic terminal, where we had some breakfast knowing this may be all we eat until tonight in the village. Our next three legs on the Air Nuigini domestic prop airplane were to Lea, Madang and finally Wewak.

When we arrived in Wewak, we were greeted by some of our Hauna friends who came to welcome us and help us with luggage. Two hours later, our plane was loaded and we were ready to leave for Ambunti. 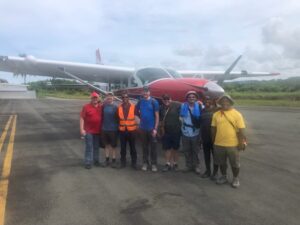 Because we had so much cargo and there were ten of us on a ten-seater airplane, we sent pretty much all of our luggage and all of the food we’d need in the village via cargo truck to Pagwi, which is the only place a road touches the mighty Sepik and it’s a three-hour bumpy ride from Wewak. A crew would come upriver bringing our cargo from there the next day.

When we got out of the plane at Ambunti the full effect of the Sepik humidity hit us like a ton of bricks. We were getting closer.

We loaded up the canoe and embarked on the beautiful ride upriver. It was a long trip. Traveling on the river as the sun goes down was a new experience for me. The main danger on the river is that you’d hit a giant log and capsize the canoe or tear apart the motor. Fortunately, these men are expert navigators of the river and can do it after dark with a large flashlight. So, after 3 ½ hours, we cut the motor to idle as we came into the outskirts of Hauna Village.

There are many more flashlights and small lights in huts than there used to be due to small solar panels that are being widely introduced. When we got to the lighted Big House, the banks were lined with kids and adults singing to us, putting a necklace around our neck and giving us each a gift. They had decorated the entrance with jungle materials and arch made from cherished jungle fruits and peppers, which was a real honor for us and our arrival. I think just about every person in the village greeted us even though we arrived so late. Lots of hugs from old friends and introductions to the new members of our team.

We had not eaten anything since the light breakfast in Moresby so we were starved. We had a simple spaghetti dinner, but boy was it good! We pretty quickly went to bed.