Marilyn grew up on a small farm in Valparaiso, Indiana, as the eldest of four daughters of Martin and Lois Laszlo. As a young girl, while plowing the fields of her parent’s farm, she made a commitment to be a missionary.

She graduated from Bryan College, Tennessee, which awarded her an honorary Doctorate of Letters (May 2003). Marilyn studied linguistics at the University of Oklahoma and then kept her commitment to God by serving with Wycliffe Bible Translators. She and a translation partner served in Hauna Village, home of the Sepik Iwam people of Papua New Guinea. Marilyn, her sister Shirley, and their language helpers took an unwritten language and created an alphabet and reading books, and taught the people to read and write. Marilyn and Shirley did medical work, and trained indigenous people to operate a local school, store, and clinic.

Today the ministry that Marilyn started continues on in Hauna Village being led by her sister Shirley. 700 students are being educated in Hauna and other surrounding villages on the Sepik. Teachers are trained in Hauna and then sent out to work in villages up river. The two-story medical clinic that Marilyn built still exists. Each day, one room is used as a clinic where a nurse gives basic care and hands out medications if they are available. Occasionally the other rooms are made operational for a team of doctors who bring their specialties to the jungle environment.

Marilyn moved back to the United States permanently to take care of her aging parents. She began telling her story in churches and through her three videos “Mountain of Light,” “Come by Here” and “Return to Hauna.” They can be found in our store here.  During the past 20 years, Marilyn has spoken to hundreds of thousands of people in churches, on college campuses, at retreats and conventions.

In 2012 due to health issues, Marilyn had to cease speaking publicly on the road. She returned to Hauna for a final visit with her friends there and to remember where it all began.

Marilyn passed away on September 9, 2021. Many people gathered to celebrate her life and hear and share stories of her impact. The LML Board of Directors established the Marilyn Laszlo Legacy Fund in her memory. This fund has been set up as a scholarship endowment for young people going into the mission field or Bible translation work. Giving to the Marilyn Laszlo Legacy Fund will allow your gifts to give vital scholarships in perpetuity to those following Marilyn’s path. You can give toward this fund here. 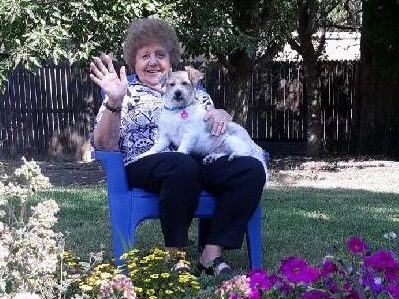 At a time in her life when most folks are retiring, Shirley Killosky is still “going strong!” Before moving to Hauna Village, Papua New Guinea in 1979 to work in literacy, she taught school in northwest Indiana. Shirley earned her B.S. in Education from Indiana University and a Master’s Degree from Valparaiso University in Valparaiso, Indiana.

Shirley founded the Hauna schools where currently more than 700 students are enrolled in our elementary and high schools. Current responsibilities of Field Director and Supervisor for CODE High School in Hauna occupy most of Shirley’s time. The Sepik Christian Ministries National Board was formed to be the PNG registered organization responsible for education, and the ministry continues to expand to remote jungle regions. Laszlo Mission League has ongoing requests to open new schools “up river” to teach children and adults who have never had the opportunity to read, write or hear the gospel of Jesus Christ.

Shirley loves to read, and reads two or three books a week thanks to her battery light, which she says stays on all night! Also, God seems to be keeping Shirley in good health in order to keep the high school going in Hauna.

As a mother of three adult children (James, Lisa and Donald), two grandchildren, and four great grandsons, Shirley’s ongoing passion is to support and care for the people of Papua New Guinea where she has invested most of her life. “I saw how much the people in the jungle needed assistance in all areas of life – both physical and spiritual. I think there is still much to do and many people still need to be reached.” – Shirley Killosky

Continuing strong without me

The ministries in Hauna are continuing strongly even through I’m not there. Even my high school class is being taught by Peter, my main administrator there in the Hauna office. It’s hard to believe I will miss an entire school [...]

Due to the Covid-19 pandemic, I am still locked down in my home in Boise, Idaho. It was good to be here for Thanksgiving and Christmas with my family, but it has now been one full year that I’m sequestered [...]

Hello All. 2020 has certainly been an extraordinary year. I usually come home after the school year in PNG in order to see my family in the US and to allow the village to function and do the ministry without [...]